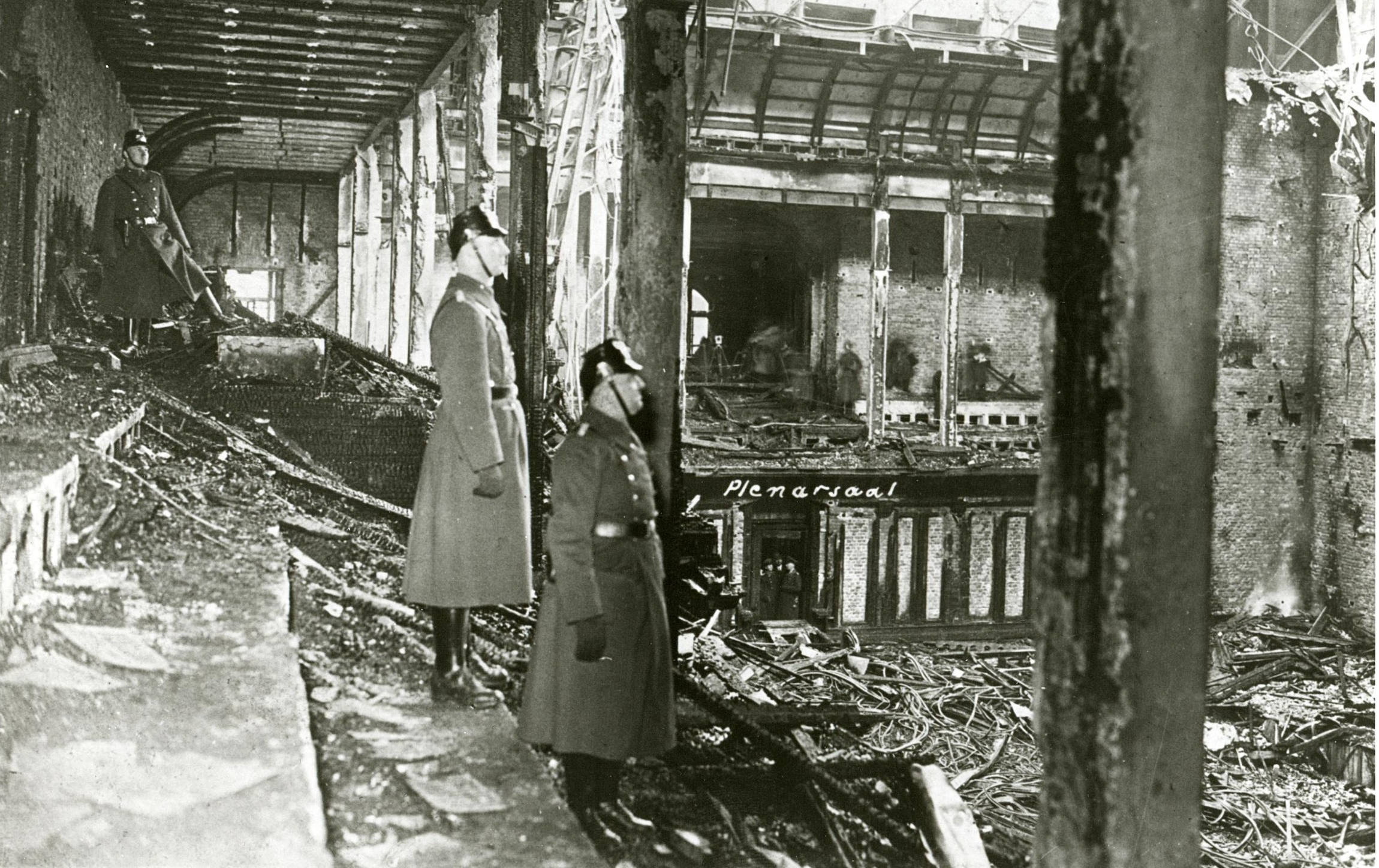 In response to the fire, the government passed a decree that suspended most civil rights under the Constitution, making way for an intense campaign of repression by the National Socialists (only days before [a federal election](https://en.wikipedia.org/wiki/German_federal_election,_March_1933)) against their enemies – most of all the Communists, whom they accused of having started the fire as a starting shot to a Bolshevik-style revolution.

>Decree of the Reich President for the Protection of the People and State of 28. February 1933

>On the basis of Article 48, Section 2, of the German Constitution, the following is decreed as a defensive measure against Communist acts of violence that endanger the state:

>§ 1
Articles 114, 115, 117, 118, 123, 124, and 153 of the Constitution of the German Reich are suspended until further notice. Thus, restrictions on personal liberty, on the right of free expression of opinion, including freedom of the press, on the right of assembly and the right of association, and violations of the privacy of postal, telegraphic, and telephonic communications, and warrants for house searches, orders for confiscations as well as restrictions on property are permissible beyond the legal limits otherwise prescribed.

>§ 2
If any state fails to take the necessary measures to restore public safety and order, the Reich government may temporarily take over the powers of the highest state authority.

>§ 3
State and local authorities must obey the orders decreed by the Reich government on the basis of § 2.

>§ 4
Whoever provokes, appeals for, or incites the disobedience of the orders given out by the supreme state authorities or the authorities subject to them for the execution of this decree, or the orders given by the Reich government according to § 2, can be punished – insofar as the deed is not covered by other decrees with more severe punishments – with imprisonment of not less than one month, or with a fine from 150 to 15,000 Reichsmarks.

>Whoever endangers human life by violating § 1 is to be punished by sentence to a penitentiary, under mitigating circumstances with imprisonment of not less than six months and, when the violation causes the death of a person, with death, under mitigating circumstances with a penitentiary sentence of not less than two years. In addition, the sentence may include the confiscation of property.

>Whoever provokes or incites an act contrary to the public welfare is to be punished with a penitentiary sentence, under mitigating circumstances, with imprisonment of not less than three months.

>Insofar as a more severe punishment has not been previously provided for, the following are punishable with death or with life imprisonment or with imprisonment not to exceed 15 years:

>1. Anyone who undertakes to kill the Reich President or a member or a commissioner of the Reich government or of a state government, or provokes such a killing, or agrees to commit it, or accepts such an offer, or conspires with another for such a murder;

>3. Anyone who commits a kidnapping under Section 239 of the Criminal Code with the intention of making use of the kidnapped person as a hostage in the political struggle.

>§ 6
This decree enters into force on the day of its promulgation.

The fire started in the Reichstag building, the assembly location of the German Parliament. A Berlin fire station received an alarm call that the building was on fire shortly after 21:00. By the time the police and firefighters arrived, the main Chamber of Deputies was engulfed in flames. The police conducted a thorough search inside the building and found van der Lubbe. He was arrested, as were four communist leaders soon after. Hitler urged President Paul von Hindenburg to pass an emergency decree to suspend civil liberties and pursue a “ruthless confrontation” with the Communist Party of Germany. After passing the decree, the government instituted mass arrests of communists, including all of the Communist Party parliamentary delegates. With their bitter rival communists gone and their seats empty, the Nazi Party went from being a plurality party to the majority, thus enabling Hitler to consolidate his power.

puppiadog: I could see how they easily passed the Enabling Act. It would be like some Muslims burnt down the White House or Capitol Building…immediately after 9/11.

Previous Post: « The US Government Lost $1.2 Trillion, or $2.2 Million Every Single Minute In 2017
Next Post: Portrait of man named John Bour with a cat in one hand a bottle of Raleigh Rye whiskey in the other, c. 1907. »