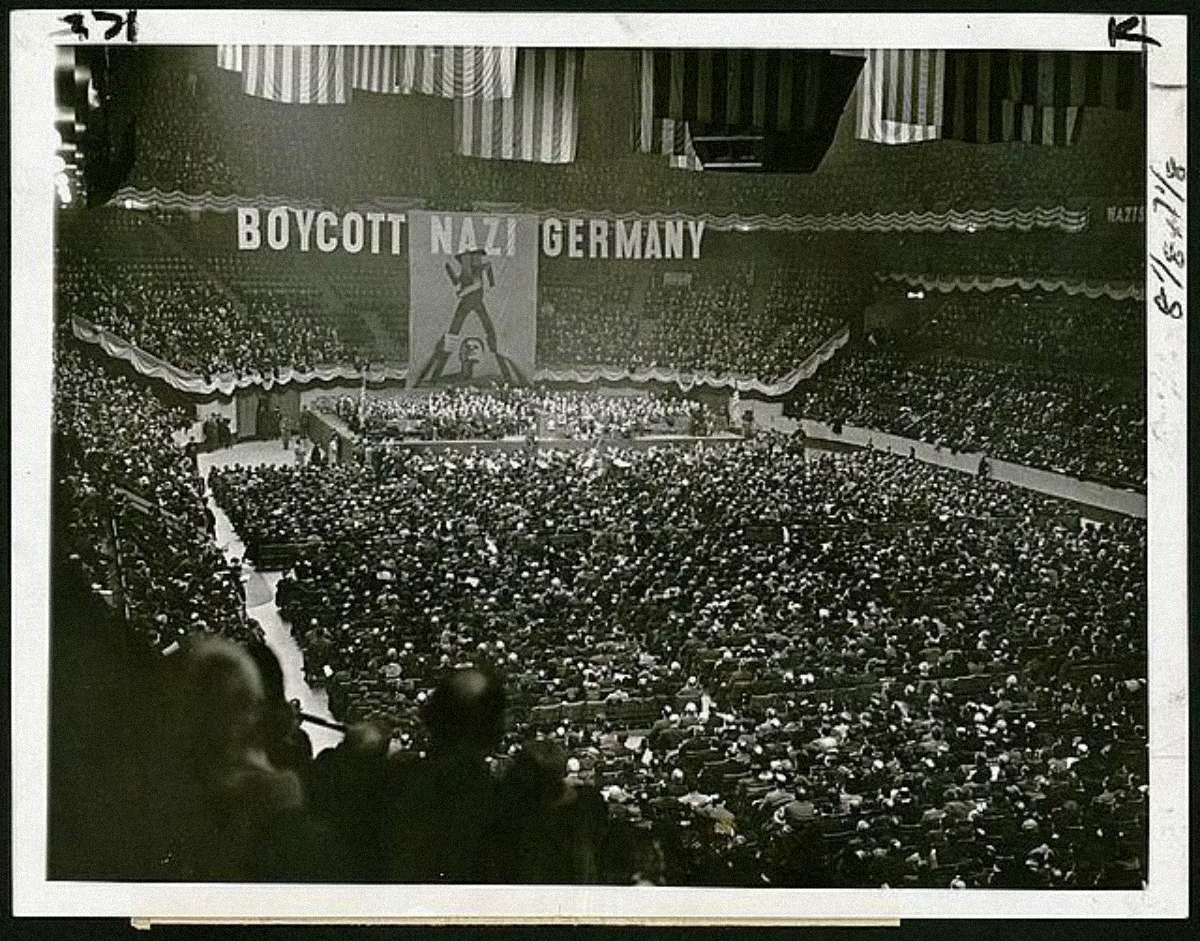 This photo is from 1937 anti-Nazi rally at Madison Square Garden, but we expect the spirit to be similar in 1933

Today in NYC History: The 1933 Rally Against Hitler at Madison Square Garden

There has been a lot of upsetting news the last couple of days. New Yorkers have shown resilience in the face of adversity before, one example being their defiant rally against Nazism on March 27, 1933, following the elevation of Adolf Hitler to Reich Chancellor on January 30, 1933. In the weeks following the Nazi Party’s ascent, their paramilitary group, the SA (“Brownshirts”) terrorized Jewish communities across Germany. In New York City, the condemnation of the Germans was universal, with the city’s leading German-American newspaper editor slamming the “insane persecution of the Jews” and warning, “Any regime founded upon the basis of religious or racial persecution must inevitably meet the united moral opposition of the civilized world.” In fact, voices from all around the country sent support to the New York Jewish community, which began planning its response.

On March 12, more than 1,500 people attended just the planning meeting. Imagine moderating that one. The group decided to rally at Madison Square Garden III. Perhaps the least remembered of the four Madison Square Gardens, the third MSG was located at 49th and 8th, and was nicknamed “The House That Tex Built” after its owner, boxing promoter Tex Rickards.

On the evening of March 27, approximately 23,000 people crammed into the arena, with more than 30,000 supporters outside listening to speakers broadcast the event. A roster of notable speakers raised their voices, including former Governor Al Smith, U.S. Senator Robert Wagner, prominent clergy, Jewish activists, mayoral candidate Fiorello LaGuardia and Rabbi Stephen Wise, president of the American Jewish Congress. You can watch short clips of Smith, LaGuardia and Wise here. In addition to denouncing the Nazi government, the main purpose of the rally was to demand an American boycott of German goods. While the idea was popular among New Yorkers, Secretary of State Cordell Hull was less than interested.

One entity that shouldn’t get too much credit is Madison Square Garden, which six years later opened its doors for a packed American Nazi rally that denounced “Frank D. Rosenfeld” and “the Jew Deal,” while a giant George Washington banner hung in the background. DA Thomas Dewey convicted the organizer, Fritz Kuhn, of forgery and larceny charges. In a Today in NYC History twist, Thomas Dewey was also the star of the alternative story for today, having captured famed baseball mogul Alex Pompez in Mexico on March 27, 1937.

Look up the pro Nazi rallies of that time. The photos are terrifying from both the US and the UK. « “Cannabis is not an entrance drug – it’s an exit drug from pharmaceuticals and narcotics.”
The rich screws the poor, and politicians screw citizens. Same old, same old »