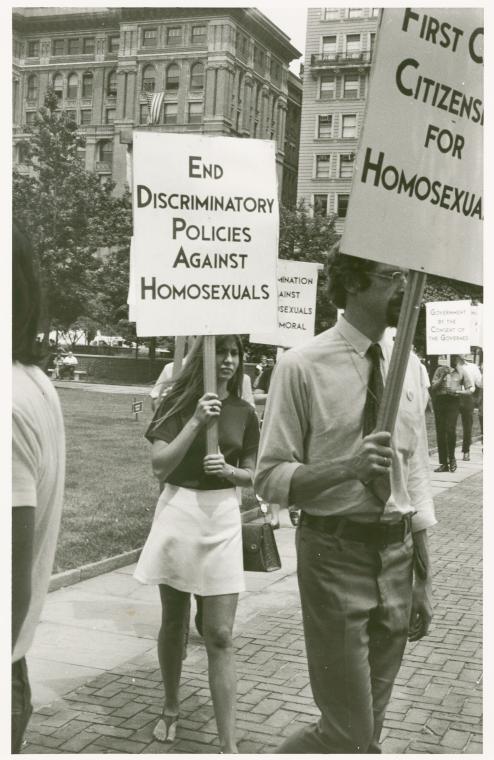 On July 4, 1965, thirty-nine individuals gathered outside Independence Hall to picket for homosexual rights. This event, one of the earliest organized homosexual rights demonstrations in the United States, sought to remind the public that basic rights of citizenship were being denied to homosexual individuals. Reprised each year through 1969, the year of the Stonewall Uprising in New York City, the “Annual Reminders” helped define the outward presentation of homosexual activism going forward.

A black and white photograph of picketers whose signs read: opportunity, equality, and no society can be great without All of its citizens
Pickets promote acceptance in front of Independence Hall during the first Reminder Day on July 4, 1965. (New York Public Library)

The 1965 Reminder picket, organized by the East Coast Homophile Organization (ECHO), responded to a similar successful picket at the White House in April 1965. The leader of the Washington demonstration, Frank Kameny (1925-2011), together with Philadelphia activist Barbara Gittings (1932-2007), helped orchestrate the 1965 picket in Philadelphia in just three months. Kameny insisted that everyone participating in the demonstration wear business-appropriate dress in an effort to show the normalness and employability of the homosexual community. The emphasis on societal conformity led some to question whether the Reminders represented all homosexual people, especially transgender individuals.

Projecting an appearance of normality was of particular importance to Kameny, who had fought a protracted legal battle with the federal government from 1958 to 1961 over his dismissal from public service due to his sexual orientation. With Independence Hall and the Liberty Bell as a background, the professionally dressed picketers carried placards demanding equal treatment under the law for more than two hours in front of a sizable crowd.

At the time of the 1965 march, the demonstration constituted the largest known demonstration for homosexual issues in the United States. The “Annual Reminders” also became the first such demonstrations to be repeated over consecutive years (1965-69).

The Reminders reflected broader trends in civil rights activism in their organization, evolution, and eventual dissolution. While the pickets were peaceful, they were a step up from sit-ins such as the Dewey’s Lunch Counter sit-in by gender-variant teenagers just months earlier, in May 1965. In the mid to late 1960s, civil rights demonstrations became more overt and confrontational, a trend that culminated for the homosexual movement with the Stonewall Uprising on June 28, 1969, in New York City. The final Reminder Day protest occurred that year on July 4. Although forty-five individuals participated, the organizers concluded that the course of homosexual activism had been changed with the events of Stonewall and so the Reminders were put aside in favor of events that evolved into the pride parades that continued into the twenty-first century.

In 2005, the Pennsylvania Historical and Museum Commission placed a marker at Sixth and Chestnut Streets, near Independence Hall, to commemorate the Annual Reminders as a pivotal moment in the homosexual movement. In 2015, a weekend-long celebration and reenactment paid tribute to the fiftieth anniversary of the first Reminder Day picket. The placement of the marker, as well as the continued celebration of the Reminder Days, sought to assure that Philadelphia’s contribution to homosexual activism would have a place in history alongside Stonewall.

i_have_all_my_toes: My grandpa was a gay man in America during that time and I’ve always wondered what it was like for him. He died before I was born and during the aids crisis, which is another part of history I’m interested in, so I’ve never gotten the chance to talk to him about it. Previous Post: « “The essence of tyranny is not iron law. It is capricious law.” Christopher Hitchens (13 April 1949 – 15 December 2011)
Next Post: An Iranian soldier looks out over the desert, darkened under clouds of burning oil set alight by Iraqi forces in 1990 »