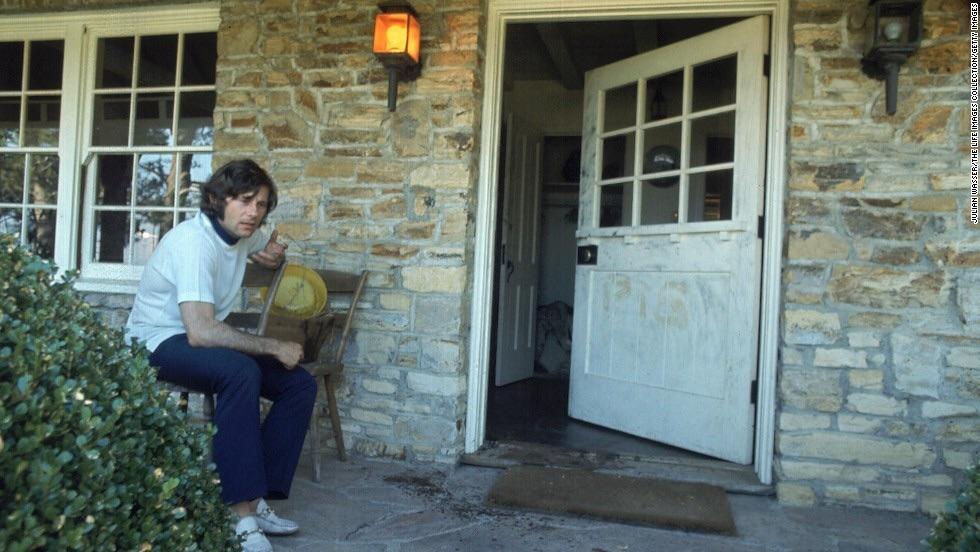 HatesNewUsernames: Having looked at the pictures I can not imagine going back into that house.

BoinkBoinkEtAliae: Her last words were “Please, please don’t kill me. I don’t want to die. I just want to have my baby.”

mojorising1329: You can still see the word “PIG” smeared in blood on the front door

tremendosaur: The “You Must Remember This” podcast does an excellent job documenting what we know about everything leading up to these horrible murders. Highly recommended listening.

jadeandobsidian: Charles Manson deserved to die. Thank god he doesn’t have the chance to derive any satisfaction from his fangirls anymore.

wu_shogun: Why was he targeted?

ThePurpleGodzilla: No excuse whatsoever for what Polanski did later in life but goddamn this is a heartbreaking photo. I can’t stand the people who romanticize that piece of garbage that died yesterday.

CarlosBeltran: Polanski also survived the Holocaust, and lost his mother at Auschwitz. Of course, none of that excuses his later crime.

Elephant_on_Stilts: At this point in his life I feel bad for him. Losing your wife and child is hard. But Roman is a piece of trash too:

> Since 1978, he has been a fugitive from the U.S. criminal justice system for drugging and raping a 13-year-old girl and then fleeing the country.

According to the charges:

> On 11 March 1977, three years after making Chinatown, Polanski was arrested at Jack Nicholson’s home for the sexual assault of 13-year-old Samantha Gailey, who was modeling for Polanski during a Vogue magazine photo shoot around the pool. Polanski was indicted on six counts of criminal behavior, including rape. At his arraignment, he pleaded not guilty to all charges. Many executives in Hollywood came to his defense. Gailey’s attorney next arranged a plea bargain in which five of the six charges would be dismissed, and Polanski accepted.

As a note, Jack Nicholson was not home. He was currently filming a movie and was not involved.

KookaburraJim: He looks so lost and broken. Seeing the raw pain of loss in a photograph is so awful, it is no longer a private moment of grief, but one for all the world to see. Manson deserved death, he deserved it immediately, not slowly rotting away in some prison.

SwimMikeRun: His expression says “Really? You’re going to take a photo of me in this situation?”

JrodaTx: The Horrors that happened behind that door

mojorising1329: Looks like it dried up and the cops or whoever just gave it a quick once over scrub after they took some photographs

bensawn: Look I’m not trying to say I condone anything that Polanski did later in life, but if I was ever going to give anybody a free pass on something, it would probably be a holocaust survivor who would later have their wife and child murdered in a home invasion.

BannedOnMyMain17: don’t forget he lost a cousin that day too.

faithle55: Fingerprint powder on the door.

But I don’t think this is the day after. They were killed in the evening and not discovered until the following morning – and not all that early. IIRC Polanski was in Europe at the time. He would have been very hard pressed to get back to LA while it was still daylight.

Charles Manson dies alone in a hospital after spending most of his life in prison. This reminds me of that movie almost heroes.

“Wait, instead of murdering him, let’s just wait it out, and let time deal with him. The ravages of old age will inflict a punishment we could never achieve”

My_Body_The_Mystery: Sharon Tate’s child would have been 52 years old. Even though Charlie didn’t murder a pregnant woman himself he died with her blood on his hands (and many other innocent victims.) Charlie was a creation of a bad system / neglectful parents and probably undiagnosed illness

Chafram: He tried to start a race war in the USA. As if that’s what the country needed. Or needs. Or will ever need. Fuck that guy.

_Mr-Skeltal_: What exactly did he do? I looked through his Wikipedia page but it rambles on about his family and says stuff about him running a cult, and supposedly giving “orders” to kill, but it doesn’t sound like he was running Jonestown. I would think that the cult members are adults and are still responsible for their crimes.

lowlife9: Man, he better hope there is no hell.

angryadmin: JusticeServed? Not really, the State of California spent over $5 million keeping him incarcerated.

Tikidude66: Charles Manson was the epitome of twisted, delusional evil. A warped cultural icon that brought the love and sexual freedom of the hippie era to a screeching halt. Regardless of your views of nature vs nurture, this man (if you could even call him that) was a broken wreck beyond the healing realm of human empathy and conpassion…

Mellonhead58: Here’s to hoping he got good after all this time

GroundhogExpert: I wonder how many people incorrectly think he’s a serial killer.

Work_High_not_Hard: The Vice article on Facebook has more than 200 sad reacts. People that read Vice are retarded.

techiejames: He was in prison longer than I’ve been alive.

matthewboy2000: Hurray, that’s one of the shit stains of the world removed.

Miwooko: Didn’t know about the race riot and I’m really impressed with the educated responses. He most certainly was an evil person to the core.

alyisdead: No lie, I thought his bitch ass was gonna live forever. Evil never dies; I hope he suffered the entire time.

JimmyLegs50: For anyone unfamiliar with Manson and the Tate Murders, I recommend *Helter Skelter*. It’s a great read, and you’ll come out of it feeling the same way I do.

Fuck that cunt and may he rot in hell.

chubbum_puppums: So he died alone. How is this justice served? Many people die alone

CplGoon: So much for being immortal, you prick.

Eraser-Head: His music will live on forever

bacon_eating_infidel: And nothing was lost to the human race what so ever. This bag of shit should never have been kept alive to begin with.

multiplesifl: The Violent Midget Hippie has ceased to be. Boo. Hoo. :p

cmann360zamboni: What a waste of tax dollars. Should have kept him in a pig pen .

loganlogwood: I wonder how much money it cost to keep this guy alive throughout his incarcerated life.

Brazda25: Burn in hell you piece of sh*t

ScriptThat: He was still alive? meh, whatever.

iamnearfromnormal: So he’ll be arriving in hell about now… where his new job will be waiting for him.

techlozenge: And nothing of value was lost…

texas_4_ever: Why do people with life sentences get any type of surgery….?

Pickled888: Burn in hell you rotten shit excuse for a human

peanutbutter_alpaca: Pretty crazy, he died on birthday along with Lil Peep.

Here comes Charles Manson, with a swastika on his head
He’ll lay down on a lava couch, because there’s fire in his bed

Previous Post: « Abusive teacher who force fed toddlers Wasabi gets a taste of her own medicine from an angry parent
Next Post: “Solitude is dangerous. It’s very addictive” Jim Carrey »