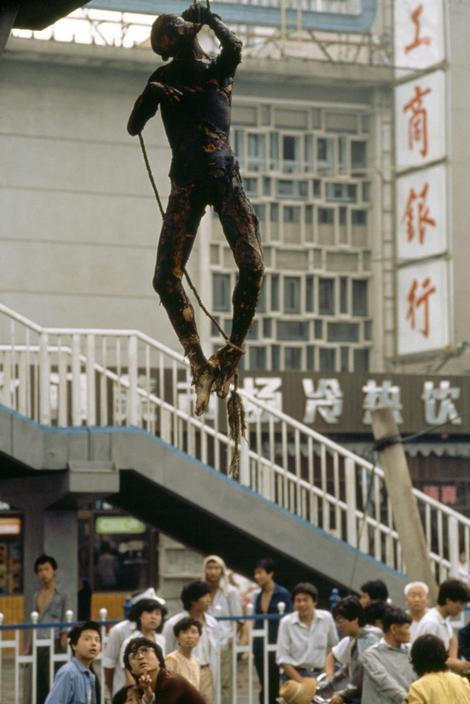 _RarkGrames_: Why we gotta do this shit to each other?

Jentilly: Interesting to see the crowds reaction. One guy appears to be laughing, the worried look on the father’s face as his small child points, and others just seem to be going about their day

tdellaringa: It’s pretty unbelievable that in a modern, advanced society that something like this would happen. It’s like a scene from the middle ages. I wonder if we realize just how awful this is.

MissRockNerd: I wonder how this picture got out of China. Iirc the photographer who took the still photo of Tankman had to hide his film canisters in his toilet tank when the police came knocking.

daqafwz: Chinese government debated for two months for what to do as the focus of the protests shifted from ending corruption caused by economic liberalization to one that demands the Communist party stepping down.

To make matters worse, the underemployed and hooligans of the city began to torch stores and inciting violence around the city. Isolated soldiers were never given orders to fire back, and as least half a dozen were dragged from the marching columns by the mobs and senselessly beaten and killed.

China was in serious social change as its workers and students deal with the massive unemployment and inflation economic reforms have brought about. Old state run factories were underwater and can’t seem to compete with cheap foreign imports from Japan etc. Workers were out of work and can’t afford to buy food while the connected got rich in skirting the tariffs and set up dodgy import/export businesses. Crime rates skyrocketed around the late 80s/early 90s. And there is a general lack of faith in the system. Not unlike the social conditions around the Jasmine revolutions in Arab countries.

Previous Post: « a German Zeppelin floats past the Empire State Building, 1936
Next Post: The eruption of Mount Pinatubo in the Philippines on June 15, 1991 »