They’re all in on it. The NYT connecting the dots between Weinsten, Clinton, Trump, Jeff Bezos, tabloid magazines and high profile investors. (long read)

The producer Harvey Weinstein relied on powerful relationships across industries to provide him with cover
as accusations of sexual misconduct piled up for decades.

Ballsdeepinreality: If a single person can do that (manipulate journalists, threaten, settle suits, etc.) imagine what a *company* can do.

notevelyndrothschild: Max Blumenthal says that Weinstein threw various parties for Clinton, and people like Ehud Barak would just happen to be there also.

TheMadQuixotician: And when he knew he was screwed, he twisted the narrative

>Mr. Benza and Mr. Weinstein were exploiting a longstanding system of favor-trading between the press and the movie business. Gossip writers need a stream of insider scoops, industry beat reporters need exclusives on the next big deal and glossy magazines need celebrities who can drive newsstand sales. Mr. Weinstein, who wanted glowing coverage, could provide that and more.

>The producer often held out business opportunities to those who covered him. He had book and movie deals with writers and editors at Fox News, The New York Post, Premiere magazine, Vanity Fair, Variety and elsewhere. In Mr. Benza’s case, a book contract came immediately after he left The Daily News. In interviews, several journalists who had business ties to him said the arrangements did not cause them to pull punches.

SixVISix: NYT is as guilty as any of them. State mouthpiece spouting corporate bullsh*t

notevelyndrothschild: “Israel’s Prime Minister Benjamin **Netanyahu and his aides have been “active partners” working in “total coordination” with US President Donald Trump and his administration** in the lead-up to the president’s anticipated speech Wednesday recognizing Jerusalem as Israel’s capital and declaring his intended relocation of the US Embassy from Tel Aviv to Jerusalem, Israel’s Hadashot TV said Tuesday evening.”
https://www.timesofisrael.com/tv-netanyahu-and-aides-were-active-partners-with-trump-team-on-jerusalem-move/ “I just want you to let you know that Harvey’s a rapist and this is going to come out at some point,” Dunham said she told the campaign. “I think it’s a really bad idea for him to host fund-raisers and be involved because it’s an open secret in Hollywood that he has a problem with sexual assault.”

tanmanlando: So we go from finding Dunham to be a absolute nutcase, to now criticizing somebody for not listening to her?

lazlounderhill: Lena the Kid Sister Diddler? The lack of self-awareness on display here is truly astonishing.

thewolfonthefold: Did anyone ask Dunham how she feels about Clinton’s response? Why did Clinton act that way, if Dunham had warned her? A JUDGE HAS WARNED THAT HE WILL LIMIT THE “GRAPHIC, SEXUAL QUESTIONS” IN A CASE AGAINST CONVICTED SEX OFFENDER AND CHILD PREDATOR JEFFREY EPSTEIN.

The judge presiding over it has declared that when it comes to “graphic, sexual questions, the likelihood is that I will not allow them into evidence.”

Palm Beach County Circuit Judge Donald Hafele already ruled in favorite of Epstein when he agreed to delay the next hearing in the 8-year-old civil lawsuit until March 2018, according to a report from the Palm Beach Post. Now, the idea that he won’t allow “graphic, sexual questions” in a lawsuit over sexual misconduct is ludicrous.

This lawsuit, which was filed on behalf of three women who claim Epstein paid them to give him “sexually-charged massages” at his mansion in Palm Beach when they were teenagers, is arguably one of Epstein’s lesser crimes.

“I don’t want this to turn into whether Jeffrey Epstein is a serial child molester,” The judge said, warning that he will limit the evidence that can be used against Epstein

MKULTRAserialkillers: *the idea that he won’t allow “graphic, sexual questions” in a lawsuit over sexual misconduct is ludicrous*

Orangutan: [Judge dismisses sex abuse suit against Former Speaker of the House Dennis Hastert]) | The accuser, identified only as Richard Doe in court documents, alleged that Hastert sodomized him in a bathroom stall in either 1973 or 1974 when he was in the fourth grade and Hastert was a teacher at Yorkville High School.

CNN’s Chris Cuomo shuts down Kellyanne Conway’s defense of Roy Moore: ‘It seems like you have no standard of morality’ (theweek.com)

This is basically what folks think?
“Facts of 2017. Republicans love child Molesters, men who sexually Assault women, breaking the law… …Republicans want poor people to die with no health care… … Republicans have no values, are an Abomination to Civil societys [sic]. Republicans want to kill everyone on earth…” 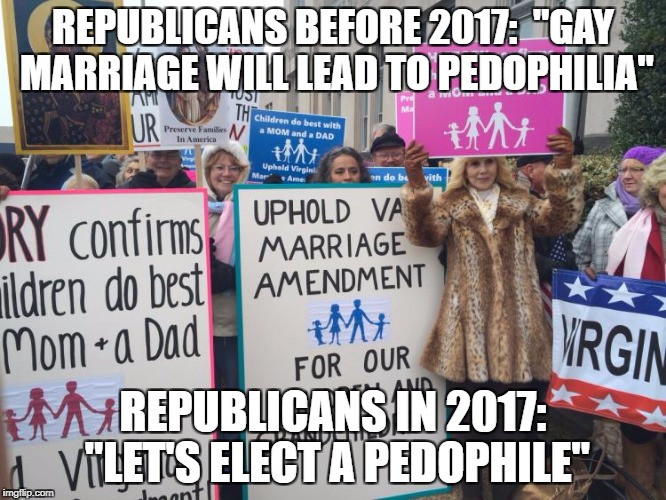