The meaning of life is just to be alive. It is so plain and so obvious and so simple. And yet, everybody rushes around in a great panic as if it were necessary to achieve something beyond themselves.
— Alan Watts, The Culture Of Counter-Culture

20 Alan Watts Quotes That Will Shift Your Perspective On Life

Here are a few Alan Watts Quotes about life. The biggest questions in philosophy have to do with the purpose and meaning of life. Having acquired great insight through studying Zen and reading scholarly text about Eastern philosophy, Watts often refers to these deep questions with piercing simplicity and beautiful metaphors.

This is the real secret of life—to be completely engaged with what you are doing in the here and now. And instead of calling it work, realize it is play.

Paradoxical as it may seem, the purposeful life has no content, no point. It hurries on and on, and misses everything. Not hurrying, the purposeless life misses nothing, for it is only when there is no goal and no rush that the human senses are fully open to receive the world.

The meaning of life is just to be alive. It is so plain and so obvious and so simple. And yet, everybody rushes around in a great panic as if it were necessary to achieve something beyond themselves.

~ About Trusting and Being Part Of The Universe ~

Through his own work and study, Watts became increasingly convinced of the idea that we are an integral function of the Universe and that the Universe is exploring itself through our consciousness which is ultimately connected to the One consciousness. Here are some remarkable Alan Watts quotes reflecting this idea.

To have faith is to trust yourself to the water. When you swim you don’t grab hold of the water, because if you do you will sink and drown. Instead you relax, and float.

You are an aperture through which the universe is looking at and exploring itself.

I’ll tell you what hermits realize. If you go off into a far, far forest and get very quiet, you’ll come to understand that you’re connected with everything.

Technology is destructive only in the hands of people who do not realize that they are one and the same process as the universe.

If we cling to belief in God, we cannot likewise have faith, since faith is not clinging but letting go. 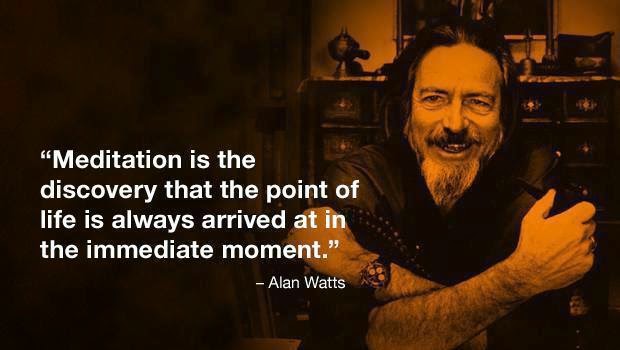 ~ About Zen and The Art Of Living ~

Watt’s views on life are considered to be ‘Zennist’, obviously owing to the influence of Zen in his life’s work. These Alan Watts quotes below are exemplary pearls of wisdom that give us insight into life issues such as morality, dealing with change, and our view about money.

The art of living . . . is neither careless drifting on the one hand nor fearful clinging to the past on the other. It consists in being sensitive to each moment, in regarding it as utterly new and unique, in having the mind open and wholly receptive.

The only way to make sense out of change is to plunge into it, move with it, and join the dance.

Things are as they are. Looking out into the universe at night, we make no comparisons between right and wrong stars, nor between well- and badly-arranged constellations.

Muddy water is best cleared by leaving it alone.

Man suffers only because he takes seriously what the gods made for fun.

Trying to define yourself is like trying to bite your own teeth. 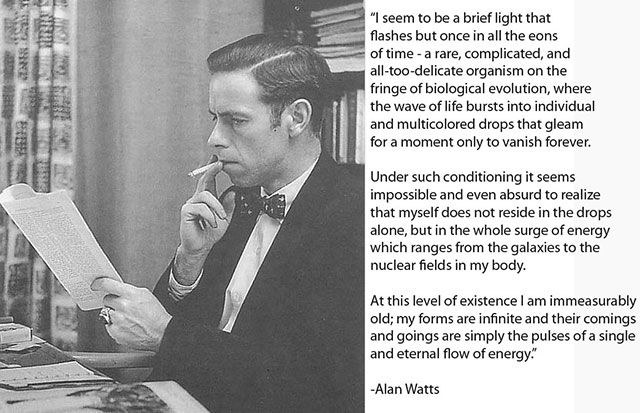 « “There are no Traffic Jams along the Extra Mile” Roger Staubach
A 9000 hp spiral turbine being built in Germany for a power plant in Norway, 1928 »