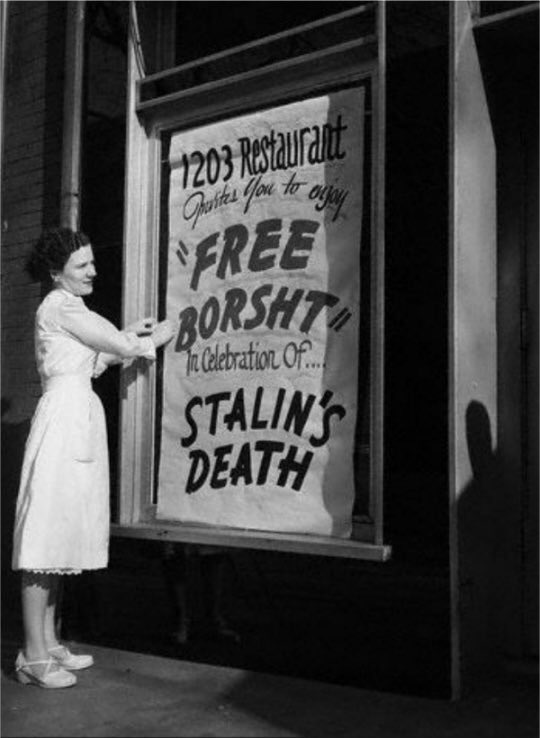 Plan4Chaos: The “Ukrainian” part is made up by the OP. The photo was reproduced multiple times and the ethnicity of the owner is unknown. He may be Russian or Belorussian or whatever.

The original caption in the newspaper The News Herald literally said:

>3/9/1953–Washington, DC: Eileen Keenan, a waitress at the 1203 Restaurant, puts up a sign outside the restaurant, March 6, inviting everyone to enjoy “Free Borst” in celebration of Stalin’s death.

And that’s basically all what’s known.

shanep35: Are the quotes then equivalent to an asterisk in today’s advertisements?

sneakadrink: Has anyone colorized this picture yet?

ClydeGortoff: Could someone tell my why it’s in English? Is it that common in Ukraine?

N1ght_L1ght_: Just now realizing how odd “an” sounds before a word starting with u although it is gramatically correct

SunnyLikeHell: Neither the waitress, nor the painter who painted the sign or the restaurant’s owner are Ukrainians/Ukrainian immigrants. The dish is called борщ = borshch. No Ukrainian would misspell that.

Trussed_Up: For those unfortunate enough to not have some slavic heritage in their makeup, this is some free stuff you should be *very* down for! lol

jerseyboyc137: Bu-bu-but, it’s wasn’t real communism! It was the free market and limited government that killed all those people! (/s)

AceholeThug: Someone should explain to her the wonders of Socialism. She has clearly been brainwashed by Pig Capitalists