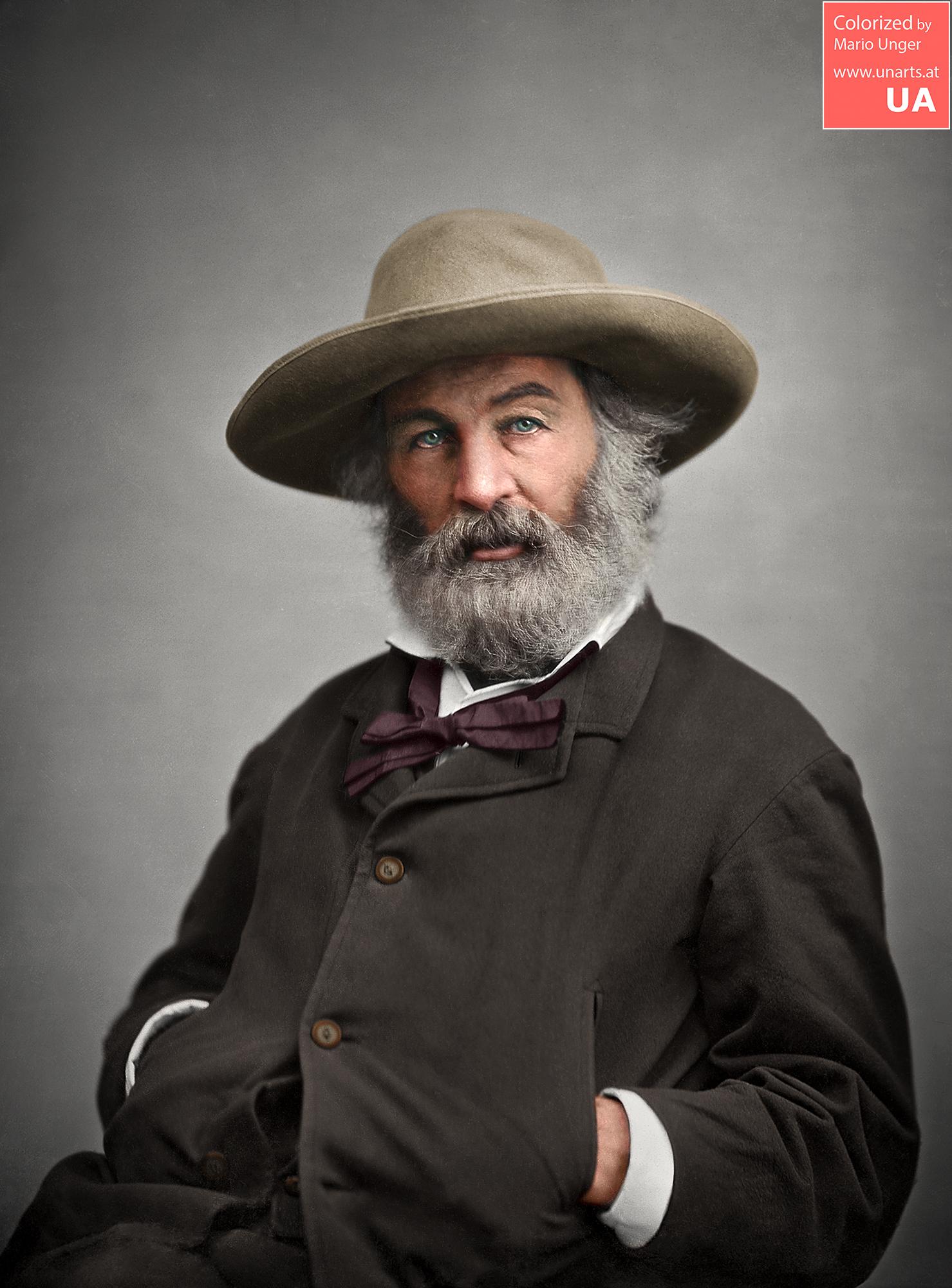 Dirty_Bird_RDS: Alec Baldwin needs to play him in a movie

Sumit316: Great job! I will suggest you to post this in ~~r/colorizedhistroy~~ /r/History/

Some info about Whitman from wiki –

> Walter “Walt” Whitman (May 31, 1819 – March 26, 1892) was an American poet, essayist, and journalist. A humanist, he was a part of the transition between transcendentalism and realism, incorporating both views in his works. Whitman is among the most influential poets in the American canon, often called the father of *free verse*. His work was very controversial in its time, particularly his poetry collection Leaves of Grass, which was described as obscene for its overt sexuality.

> Whitman’s major work, Leaves of Grass, was first published in 1855 with his own money. The work was an attempt at reaching out to the common person with an American epic. He continued expanding and revising it until his death in 1892. After a stroke towards the end of his life, he moved to Camden, New Jersey, where his health further declined. When he died at age 72, his funeral became a public spectacle.

Taken from an article

> Upon the debut of Leaves of Grass, Walt sent complimentary copies to a number of prominent literary figures (now a common promotion tactic, then a rare move of boldness). And when Ralph Waldo Emerson responded favorably to the copy he received, Whitman took the liberty to publish the response in the New York Daily Times without asking for Emerson’s permission. He even went so far as to anonymously publish reviews of his own work in several newspapers. There would be no shortage of praise for Walt Whitman.

> But Whitman and his poetry were not well-received by all. His poetry was regarded by many as obscene, and he was frequently perceived to be arrogant beyond belief. When it came to light that Whitman had published a number of self-written reviews, needless to say, people were not pleased. And in 1882 the sixth edition of Leaves of Grass, by now his life’s work, was prohibited from being published in the city of Boston on grounds of obscenity. However, despite, or perhaps because of, all the controversy surrounding him, Walt Whitman accomplished a feat that most poets and authors do not: he lived to see his work rise to prominence.

PaulsRedditUsername: *Beginning my studies, the first step pleas’d me so much,*

*The first step, I say, aw’d me and pleas’d me so much, I have hardly gone, and hardly wish’d to go, any farther,*

*But stop and loiter all the time, to sing it in extatic songs.*

King_Groovy: I can’t hear the name Walt Whitman without thinking about this [Simpsons clip](https://youtu.be/rKHyaMy2BEM)

stoniruca: You did an amazing job. For whatever reason I feel like I can connect more with the photo if it’s in color.

dvallej: is this the other WW?

babrams76: Those eyes. I may have to pull out Song of Myself today. Thank you for this.

waldo_here: I heard this guy makes some pretty good meth

NeverKeepCalm: This is wonderful! Very detailed and very well done.

existential_antelope: Old people with beards must be gifts to colorizers

caustic_enthusiast: That is a beautiful, beautiful gay man. No wonder he banged like half the dudes in North America Previous Post: « “Learn from the mistakes of others… you can’t live long enough to make them all yourselves.” Chanakya
Next Post: Robbery foiled by customers at Aldi »