EARLY ’90S DRAFTS OF LI PO’S FAMOUS POEM “WE SIT TOGETHER/ THE MOUNTAIN AND I/ UNTIL ONLY THE MOUNTAIN REMAINS.”

“We sit together. The mountain and I. Untill only the mountain remains.”
-Li Po

Li Po
Poet Details
701–762
A Chinese poet of the Tang Dynasty, Li Po (also known as Li Bai, Li Pai, Li T’ai-po, and Li T’ai-pai) was probably born in central Asia and grew up in Sichuan Province. He left home in 725 to wander through the Yangtze River Valley and write poetry. In 742 he was appointed to the Hanlin Academy by Emperor Xuanzong, though he was eventually expelled from court. He then served the Prince of Yun, who led a revolt after the An Lushan Rebellion of 755. Li Po was arrested for treason; after he was pardoned, he again wandered the Yangtze Valley. He was married four times and was friends with the poet Tu Fu.

Li Po wrote occasional verse and poems about his own life. His poetry is known for its clear imagery and conversational tone. His work influenced a number of 20th-century poets, including Ezra Pound and James Wright. 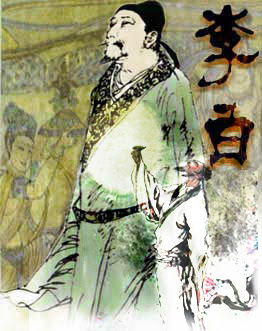 Chinese poet (701-762). He was born in the Szechwan (or Sichuan) region of China. Though he was educated, he never attempted the examinations for Imperial service, choosing instead to leave his family’s home at the age of 19 to live with a Taoist hermit. He spent the rest of his life wandering across China. He married several times, but never had a home of his own–he either lived with his wives’ families or claimed hospitality from other families named Li.

He fancied himself a knight errant in his youth. He began showing his poetry to officials, hoping to gain employment as a secretary, but his love of wine worked against him–potential employers feared he’d be unreliable or would reveal their secrets while drunk.

In 742, he visited the capital, Ch’ang-an, where he was briefly favored by the Emperor. He also established friendships with several other poets–together, they became known as the Eight Immortals of the Wine Cup. He resumed his travels a couple of years later and renewed his interests in Taoism and alchemy. He fell under suspicion of treason after joining an expedition to South China led by a former prince and plotter against the Emperor, but was released in a general amnesty in 758. He lived out the rest of his life doing the two things he enjoyed most–drinking and writing poems.

Li Po’s verse praised nature, commemorated old friends, and often dipped into whimsical fantasies–from his poem “Alone and Drinking Under the Moon”: “Amongst the flowers I am alone with my pot of wine drinking by myself; then lifting my cup I asked the moon to drink with me…”

Research from GURPS Who’s Who 2, compiled by Phil Masters, “Li Po” by William H. Stoddard, pp. 26-27. Other assistance from interrobang.

Li Po is romanized as Li Bai in modern Pinyin, which is a closer approximation of the Mandarin pronunciation, but Li Po remains the standard in Western media.

He is one of the most beloved figures of Chinese history and literature–and also one of the earliest and mostly widely known to European and American audiences. Ezra Pound’s (rather free) translations are a famous example.

My favorite Li Bai poem, which I learned by heart when I was a child (one of only two such poems that I can still remember):
“Chuan qian ming yue guang
Yi shi di shang shuang.
Ju tou wang ming yue,
Di tou si gu xiang.”
Please msg me with corrections of the romanization.

Moonlight before bed
Like frost upon ground.
Raise head to see moon,
Lower to think: home.

I translated this poem in British Literature class one day when we were studying Coleridge’s poem Frost at Midnight, which talks about the unbearable silence of being alone late at night in the countryside and how everything that you see in nature is really only a projection and amplification of what you have inside of you.

To me, the quintessential Li Bai is Zazen On Ching-t’ing Mountain…
The birds have vanished down the sky.
Now the last cloud drains away.

Previous Post: « B-25s from the 447th Squadron of the 321st Bombardment Group passed very near the erupting Vesuvius on their way to bomb targets. 1944
Next Post: “One should respect public opinion insofar as is necessary to avoid starvation and keep out of prison…” Bertrand Russell »