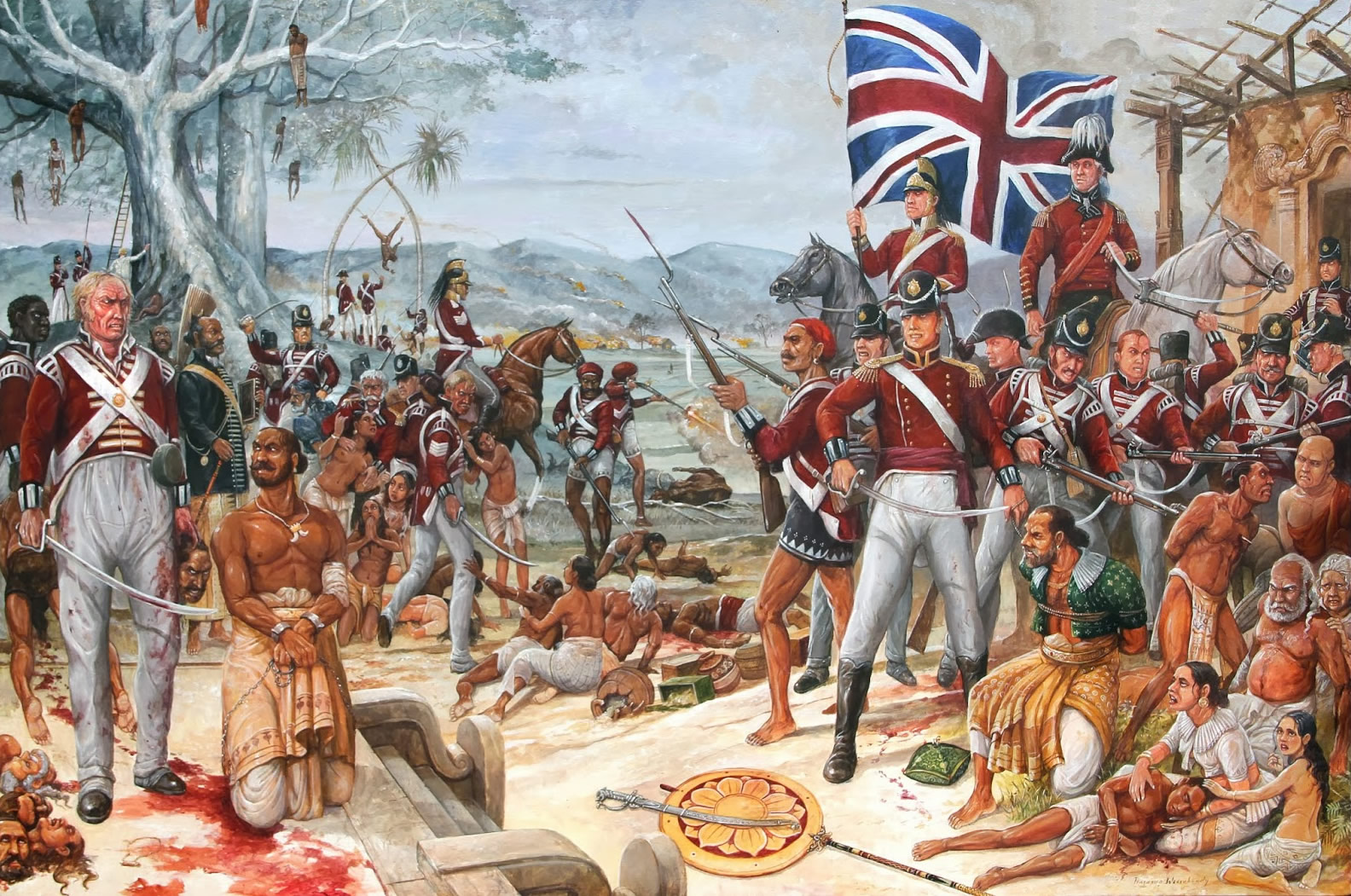 Something I’ve never really understood is why, unlike Canada or South Africa which were colonized in large sections, America was divided into 13 small colonies?

RTarcher: Firstly, Canada was originally more than one colony. The individual settlements in Acadia, Nova Scotia, Quebec and Newfoundland were all settled separately, and some of the initial settlements were French instead of English. /u/irishpatobie has more information on this above.

Secondly, there were more than 13 colonies under English rule by 1775. There were at least 26 administrative districts in the New World that answered directly to the crown, including Barbados, Jamaica, the Leeward Islands, Bermuda, St. Vincent, the Bahamas, and the Ceded Islands. There were several other colonial ventures that failed, or were never followed through once the founders had received a land patent. Examples include settlements on Madagascar, the Amazon River, the Outer Banks off North Carolina, Maine, Providence Island (Isla de Providencia), among others.

The main reason that the colonies were set up under different administrative districts is because they were established by different groups of people, at different times, with different privileges. For example, the charter granting the province of Maryland to the Calvert family in 1632 was based off the charter of the County Durham in England. Durham had special courts and legal privileges that set it apart from other areas in Britain, and was thought to be a good model for administrating a new territory at a distance. So, in the first two decades of successful settlement (1607-1627), at least five colonies were settled, each with different land patents, titles and liberties that the founders could exercise – Virginia (1607), Plymouth (1620/1), Bermuda (1615), Barbados (1627), and St. Christopher’s (1623). Plymouth was initially supposed to settle in the Virginia territory (an area much larger than the later state of Virginia), but their course took them so far north that in 1621 they received a new patent to the land they actually arrived at.

Thus, each of these colonies were settled at different times, under different rules of government, typically established by a land patent or charter from the Crown. Virginia (Jamestown) was initially settled as an attempt to mine and ship gold back to England; when no gold was found, they tried their hand at several other cash crops, including sassafras, silk, and cedar, but eventually settled on tobacco as the best way to make money. Even with the tobacco boom that followed in 1618-1630, the colony was never profitable for the founders (the Virginia Company), and the colony was made a Crown Colony (IE no longer administered by the Virginia Company, and would be ruled directly by the Crown through a Royal Governor) in 1624. The origins of Bermuda, Barbados and St. Christopher’s were similar to that of Virginia, though the settlements did not suffer the same style of “starving time” so famous in Virginia.

All of the existing settlements in the early seventeenth century were fairly far apart – at least a few weeks by sail. It was already difficult enough for people in England, whether members of a company or royal servants, to administer their colonies. It would have been next to impossible to administer one colony spread along the entire Atlantic coast of North America. As time went on, land in the New World became a way to reward royal servants (often when the crown had limited amount of land in England itself that it could give away). Places like Maryland (Calvert family), South Carolina (Lord Shaftesbury), and Pennsylvania (William Penn) are such examples. Rhode Island was founded by religious dissidents, and people exiled from Massachusetts Bay for blasphemy. Maryland became famous for its *de facto* toleration of Catholics, and Pennsylvania was established to help Quakers, who were being persecuted (and occasionally deported/sold into servitude in the Caribbean) in England and Scotland. The only real attempt at consolidation before the late eighteenth century was the “Dominion of New England” in 1686. This was an attempt to consolidate government in New England over Massachusetts, Connecticut, Rhode Island, New York, and New Jersey, which failed after 3 years. The Dominion was broken up as part of the settlement of the Glorious Revolution in England in 1689.

Each of the colonies developed their own sense of identity, which was no small concern when the time came to oppose the British in the 1770s. Each colony had their own history, laws, privileges, trading advantages, economic structure, and relationship to the Church of England. There was no reason to dissolve the foundational or functional charters that granted each colony their governments so far as the citizenry were concerned. The maps shown in introductory history text books are highly misleading. Though they show the outlines of the states and the locations of settlements, they distort the picture by making it look more evenly settled than the reality. Colonies tended to have central hubs in towns or cities on the coast, with a thinly populated hinterland. While the map shows continuous settlement, the reality was sparser, and lightly governed. There were people settling on the frontier, but they were in the distinct minority. Most people lived less than a few days journey from the coast, making a single administration for all the colonies impractical and near impossible.

irishpatobie: While I know little about the colonization of South Africa, your conception about the colonization of Canada as a monolithic colony is not accurate. In Canada, like the thirteen British colonies to its south, different European people colonized different regions at different times. For example, the British and French established and fought over semi-permanent fishing settlements on the southern and eastern coast of Newfoundland as early as the seventeenth century and this was after Basque fisherman had settlements there as well. While the French developed strong garrisons at Quebec and Montreal to protect the fur trade in the Pays d’en Haut, a separate group of French settlers, the Acadians, settled in eastern Canada in a colony named L’Acaide. These regions were also different than the Hudson Bay region/ Rupert’s Land, which was governed autonomously. When the British took possession of all of Canada in 1763, they separately governed Quebec and Nova Scotia and following the influx of American loyalists in 1783 established new colonies of New Brunswick and Upper Canada. [For good reading on this, see David Alexander’s *Atlantic Canada and Confederation: Essays in Canadian Political Economy*.]

Now for the thirteen British colonies that would declare independence in 1776, you need to remember, they were only 13 colonies in a British Empire that maintained colonies in North America, the Caribbean, and the Indian Ocean. If your question is, “Why did were the 13 mainland colonies that declared independence not governed as one entity?” the answer lies in their colonial origins. The Virginia company established the colony of Virginia in 1607 and in 1627 the king revoked the company’s charter and made Virginia a royal colony under his authority. In 1620, Puritan settlers established Plymouth colony in what became New England and later the larger and more economically successful Massachusetts Bay Colony absorbed the smaller neighbouring colony into Massachusetts. British planters in Barbados established the The Carolina as a royal colony at Charleston (Then Charles Town) in 1633. Dissenters from the authoritarian rule of Massachusetts Puritans founded Rhode Island and Connecticut in 1636. Northwestern settlers from Massachusetts settled New Hampshire in 1638. New York, New Jersey, and Delaware were colonies carved out of the land seized from the Dutch in 1664. Pennsylvania was granted to William Penn in 1681 as a refuge for Quakers and other religious dissenters and Maryland was granted to Lord Baltimore in 1632 as a refuge for British Catholics. North Carolina was a colony carved out of southern Virginia as colonists in the region demanded a more local government not subject to either VA or Carolina to the south. Finally, Georgia was created in 1732 as a refugee for English convicts and to serve as a buffer between the British colonies and Spanish Florida. [A good read on this process is Alan Taylor’s *The Peopling of British North America*.]

TL;DR: The British had individual colonies all over the world, not just in North America. Individual groups of colonists settled in regions and created their own colonial governments to serve their particular needs. In other cases, the British government established colonies to fit an economic or political agenda.

Previous Post: « “War is peace. Freedom is slavery.” George Orwell
Next Post: White supremacist Richard Spencer has been banned from 26 European Nations after trying to turn North America into a European ethno-state »