Scientists have moved the hands of the “Doomsday Clock” closer to midnight, signifying that “imminent doom” is on the horizon. 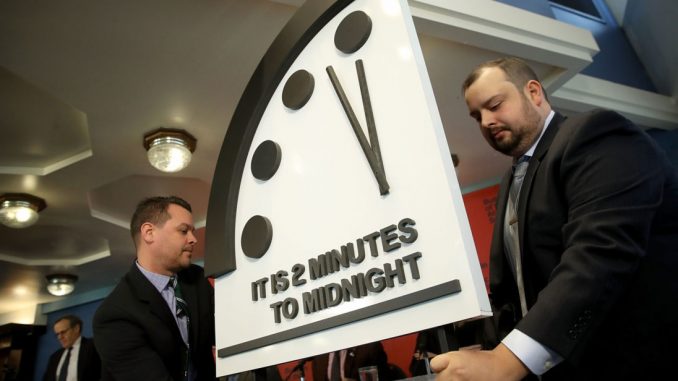 As of 25 Jan. 2018, the clock sits at two minutes to midnight. The last time the clock was this close to Armageddon was in 1953, at the height of the Cold War.

“Because of the extraordinary danger of the current moment, the Science and Security Board today moves the minute hand of the Doomsday Clock 30 seconds closer to catastrophe,” said Rachel Bronson, president of the Bulletin of the Atomic Scientists. “This is the closest the Clock has ever been to Doomsday, and as close as it was in 1953, at the height of the Cold War.”

USA Today reports: Each year, the Bulletin of the Atomic Scientists, a non-profit group that sets the clock, decides whether the events of the previous year pushed humanity closer or farther from destruction.

The symbolic clock is now the closest it’s been to midnight since 1953. It was also two minutes to midnight in 1953 when the hydrogen bomb was first tested.

“We’ve made the clear statement that we feel the world is getting more dangerous,” said Lawrence Krauss, chair of the Bulletin’s Board of Sponsors and director of Arizona State University’s Origins Project. “The danger of nuclear conflagration is not the only reason the clock has been moved forward.”

The announcement was made in Washington, D.C., at the National Press Club.

Scientists blamed a cocktail of threats ranging from dangerous political rhetoric to the potential of a nuclear threat as the catalysts for moving the clock closer toward doomsday.

The statement explaining the resetting of the time of the Doomsday Clock notes: “In 2017, world leaders failed to respond effectively to the looming threats of nuclear war and climate change, making the world security situation more dangerous than it was a year ago — and as dangerous as it has been since World War II.

“The greatest risks last year arose in the nuclear realm. North Korea’s nuclear weapons program appeared to make remarkable progress in 2017, increasing risks for itself, other countries in the region, and the United States,” the statement continued.

“Hyperbolic rhetoric and provocative actions on both sides have increased the possibility of nuclear war by accident or miscalculation.”

“On the climate change front, the danger may seem less immediate, but avoiding catastrophic temperature increases in the long run require urgent attention now. The nations of the world will have to significantly decrease their greenhouse gas emissions to keep climate risks manageable, and so far, the global response has fallen far short of meeting this challenge,” the Bulletin of the Atomic Scientists said.

“Today’s Doomsday Clock announcement must serve as an urgent wake-up call — and could be the last one we get,” said Derek Johnson, the executive director of Global Zero, a group that wants to eliminate nuclear weapons.

“Last year, the Clock ticked forward largely in response to candidate Trump’s alarming campaign rhetoric. But the reality of a nuclear-armed President Trump running loose in the world is worse than we feared, and that is clearly a central factor in this decision,” Johnson said.

The closer to a setting of midnight it gets, the closer it’s estimated that a global disaster will occur. The farthest it’s been from midnight was in 1991 as the Cold War ended when the clock was 17 minutes to midnight.

The clock has been maintained by the Bulletin of the Atomic Scientists since 1947. The group was founded in 1945 by University of Chicago scientists who had helped develop the first nuclear weapons in the Manhattan Project.

The scientists created the clock in 1947 using the imagery of apocalypse (midnight) and the contemporary idiom of nuclear explosion (countdown to zero) to convey threats to humanity and the Earth.

42 things that we should be aware of but no one is talking about (that will contribute to speeding up of the Doomsday). Previous Post: « I’ve read that it was incredibly normal for brides to be pregnant in the 18th century, but in Pride and Prejudice a couple’s implied sexual contact prior to their marriage is a huge scandal. Is this indicative of a moral class divide, or were 18th century values just not representative of reality?
Next Post: “Science literacy is a vaccine against the charlatans of the world that would exploit your ignorance.” Neil deGrasse Tyson »