Footage has surfaced of Jay-Z punching an underage girl in the face after she approached him and asked him for his autograph. 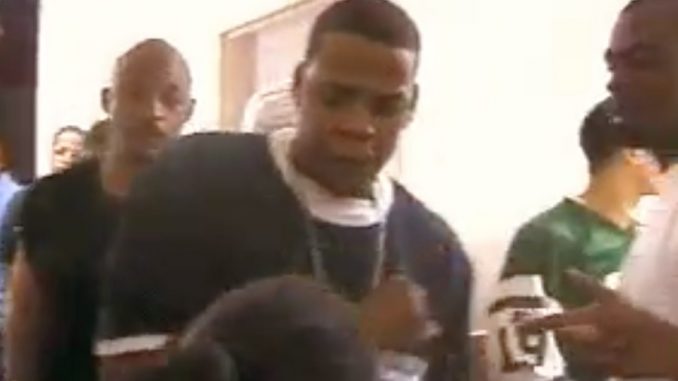 The music industry mogul, who recently engaged in a Twitter spat with President Trump, can be seen delivering a straight right jab to the young girl’s face, before following up with flat-handed right, roughly pushing her away from him.

The shocking footage is the just the latest in a long line of scandals surrounding Jay-Z, a known Satanist who promotes the Luciferian ideology of the New World Order.

At age 12, Jay-Z shot his brother in the shoulder for stealing his ring. Speaking about the incident to ABC 7, the world-renowned rapper and producer, who belonged to a gang, said that he thought he would “go to jail forever”.

But he didn’t go to jail, and his antics got worse. He has rapped about selling crack to his mother, but has lately started claiming it was “other mothers.”

The far left rapper, who has plans to run for president in 2020, hit the headlines after calling President Trump a “superbug” on CNN this week, and then went on to explain how black people don’t care about his economic success because, “It’s not about money at the end of the day.”

Somebody please inform Jay-Z that because of my policies, Black Unemployment has just been reported to be at the LOWEST RATE EVER RECORDED!

Jay-Z is a ruthless thug .. When he’s not punching Beyoncé’s sister he’s harassing/shoving around young little girls..
AND where’s the #MeToo  movement ?? Why don’t democrats denounce Jay-Z rather than use him as a campaign tool ?? SHAMEFUL#SundayMorning #DemocratsAreHypocrites pic.twitter.com/X1syAwwWxR

Jay-Z was NOT Beating A Woman In The Video

The internet has been in a silent uproar over an alleged incident of Jay-Z striking a woman, but the speculation over a 3-second moving GIF image has been proven inaccurate. The image, which has been spread through the internet through websites, instant messenger transmissions and message boards, seems to show the image of Jay-Z assaulting a women considerably smaller than he is.

Jay-Z responded to the charges though a Roc representative and categorically denied the accusations. The rep also clarified exactly where the scene came from.

“The person in the video is an executive at Roc-A-Fella and a friend of Jay-Z’s. What you see in the video is a scene from ‘Back Stage,’” he said. ‘Back Stage’ is the 2000 movie that chronicled the 1999 Hard Knock Life Tour, the roving show that featured Jay-Z, DMX, Method Man, Redman, The Roc and other popular rappers like Ja Rule. The female employee’s name is being withheld at the request of Roc-A-Fella.

“Specifically, the scene is derived from Chapter 14: ‘Two Months Too Long,’” the Roc-A-Fella rep disclosed. “The context of the play fighting is the tour has gone on too long and she is making fun of Jay-Z and if you listen you hear her teasing [like] “Gimme elbow room, gimme elbow room, I’m the Jigga man.”

Another source further detailed Jay’s relationship with the Roc executive. “She and Jay grew up together and play like that which is why no one of people watching look fazed by it,” the source said. “She still works for and with Jay.”

“Once you know its [the executive] and you know her, it all makes sense, but for the average person, they are going to run with it.” In the scene, Jays-Z’s former mentor Jaz-O can be seen to the right with a semi-smile on his face as Jay-Z supposedly strikes the women. None of the others in the scene express dismay at the display either.

According to the representative, Jay-Z and other sources, the pair is described as “life long friends,” even though the exact length of their relationship was undetermined. The Roc-A-Fella representative stated that the mainstream media has begun to call inquiring about the nature of the “video” hoping for some headlining news.

“If Jay was beating up a female, it certainly wouldn’t appear in a movie put out by Roc-A-Fella,” the rep concluded.

Previous Post: « Humans Are Hybrids Of Anunnaki – German Scientists
Next Post: “Only in the woods was all at rest within me, my soul became still and full of power” Knut Hamsun »