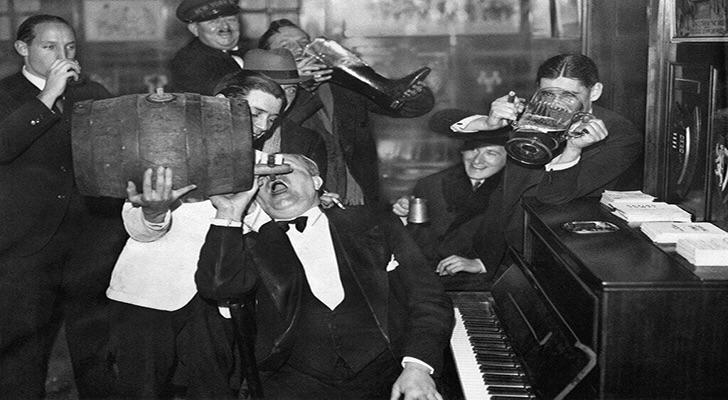 The 21st Amendment to the U.S. Constitution is ratified, repealing the 18th Amendment and bringing an end to the era of national prohibition of alcohol in America. At 5:32 p.m. EST, Utah became the 36th state to ratify the amendment, achieving the requisite three-fourths majority of states’ approval. Pennsylvania and Ohio had ratified it earlier in the day.

The movement for the prohibition of alcohol began in the early 19th century, when Americans concerned about the adverse effects of drinking began forming temperance societies. By the late 19th century, these groups had become a powerful political force, campaigning on the state level and calling for national liquor abstinence. Several states outlawed the manufacture or sale of alcohol within their own borders. In December 1917, the 18th Amendment, prohibiting the “manufacture, sale, or transportation of intoxicating liquors for beverage purposes,” was passed by Congress and sent to the states for ratification. On January 29, 1919, the 18th Amendment achieved the necessary three-fourths majority of state ratification. Prohibition essentially began in June of that year, but the amendment did not officially take effect until January 29, 1920.

In the meantime, Congress passed the Volstead Act on October 28, 1919, over President Woodrow Wilson’s veto. The Volstead Act provided for the enforcement of Prohibition, including the creation of a special Prohibition unit of the Treasury Department. In its first six months, the unit destroyed thousands of illicit stills run by bootleggers. However, federal agents and police did little more than slow the flow of booze, and organized crime flourished in America. Large-scale bootleggers like Al Capone of Chicago built criminal empires out of illegal distribution efforts, and federal and state governments lost billions in tax revenue. In most urban areas, the individual consumption of alcohol was largely tolerated and drinkers gathered at “speakeasies,” the Prohibition-era term for saloons.

Prohibition, failing fully to enforce sobriety and costing billions, rapidly lost popular support in the early 1930s. In 1933, the 21st Amendment to the Constitution was passed and ratified, ending national Prohibition. After the repeal of the 18th Amendment, some states continued Prohibition by maintaining statewide temperance laws. Mississippi, the last dry state in the Union, ended Prohibition in 1966.
________________

Uncleniles: I heard somewhere that the prohibition lead to increased binge drinking. I’m guessing this is a (former) speak easy, and these guy its customers, getting hammered one last time after drinking became legal and boring again.

123CheesePanini: December 6 1933 was probably the biggest hangover in History