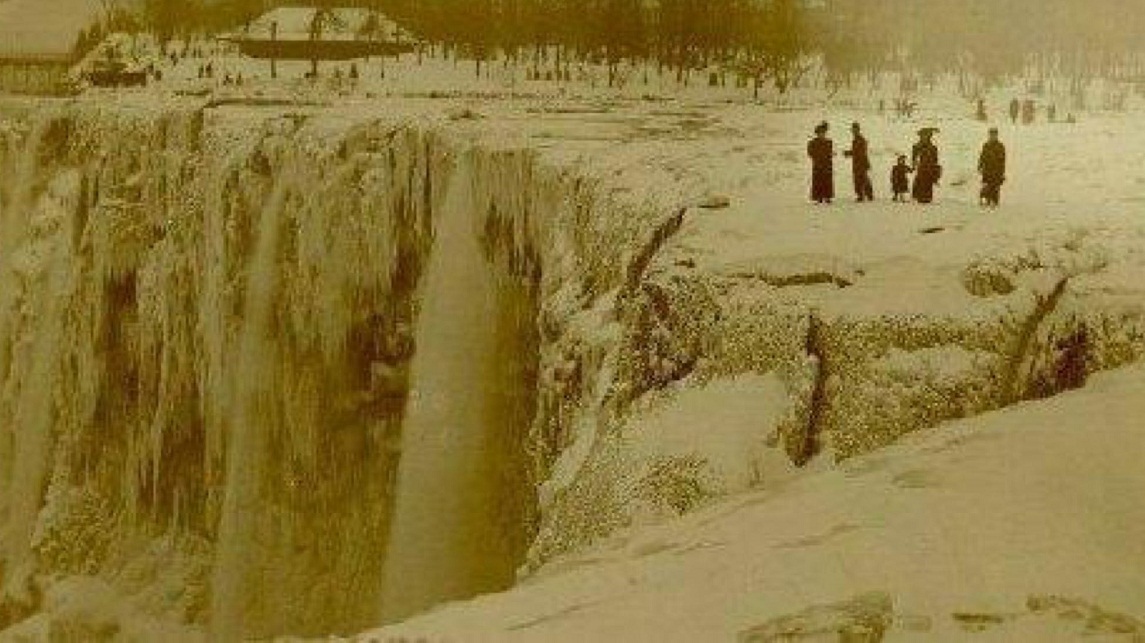 1848: Niagara Falls stops. No water flows over the great cataract for 30 or 40 hours. People freak out.

The falls were already a tourist attraction by 1848, and villages had grown up on both the U.S. and Canadian sides of the river to accommodate the sightseeing throngs. Residents also built waterwheels to harness the Niagara River’s power to run mills and drive machinery in factories.

An American farmer out for a stroll shortly before midnight on March 29 was the first to notice something. Actually, he noticed the absence of something: the thundering roar of the falls. When he went to the river’s edge, he saw hardly any water.

Came the dawn of March 30, people awoke to an unaccustomed silence. The mighty Niagara was a mere trickle. Mills and factories had to shut down, because the waterwheels had stopped.

The bed of the river was exposed. Fish died. Turtles floundered about. Brave — or foolish — people walked on the river bottom, picking up exposed guns, bayonets and tomahawks as souvenirs.

Was it the end of the world? Divine retribution for what some folks thought was a U.S. war of aggression against Mexico? Theological explanations abounded, because western New York state had been a Burned-Over District for half a century, with recurring waves of religious revivals and the rise of several new denominations and religions.

Thousands of people filled the churches to attend special services. They prayed for the falls to start flowing and the world to continue, or for salvation and forgiveness of their sins as the Last Judgment approached.

No one knew why the falls had stopped. The telegraph was still a new invention. Railroads served towns on both sides of the river, but the tracks were unreliable, and Buffalo — the nearest big city — was three hours away even when the trains ran on schedule.

But it was from Buffalo that word eventually arrived that explained the bare falls and dry riverbed. Strong southwest gale winds had pushed huge chunks of lake ice to the extreme northeastern tip of Lake Erie, blocking the lake’s outlet into the head of the Niagara River. The ice jam had become an ice dam.

And just as news traveled inward, news also traveled outward. Thousands came from nearby cities and towns to look at the spectacle of Niagara Falls without water. People crossed the riverbed on foot, on horseback and in horse-drawn buggies. Mounted U.S. Army cavalry soldiers paraded up and down the empty Niagara River.

Dangerous as that all may sound, for there was no telling when the rushing waters might return, one entrepreneur used the hiatus to do some safety work. The Maid of the Mist sightseeing boat had been taking tourists on river rides below the falls since 1846, and there were some dangerous rocks it always had to avoid, Now that the river was not running and the rocks were in plain sight, the boat’s owner sent workers out to blast the rocks away with explosives.

March 30 was not the only dry day. No water flowed over the falls throughout the daylight hours of March 31.

But that night, a distant rumble came from upriver. The low-pitched noise drew nearer and louder. Suddenly, a wall of water came roaring down the upper Niagara River and over the falls with a giant thunder.

The ice jam had cleared, and river was running again. Nothing like it would ever happen again.

The Army Corp of Engineers turned off the American Falls (the U.S. side of the river) in 1969. They built cofferdams above the falls to divert all the water to the Canadian Horseshoe Falls. (Well, it was all the water not already diverted for hydroelectric generation.)

The corps was looking for a way to remove the rocks that have piled up at the base of the American Falls, threatening some day to turn the waterfall into rapids. Nothing doing: The engineers decided it just wouldn’t be practical, and that removing the accumulated talus could undermine the cliff behind it and even speed the crumbling process.

They turned the river back on.

Redcrane5502: There used to be something called the “ice bridge” at the bottom of the falls. It was an area of frozen water you could walk out and stand on very close to falls but the water is still flowing underneath, no matter how cold it gets. The bridge broke one year and almost everyone on it died. It was banned and you can no longer stand on it during the winter

hundredseven: What could go wrong standing near a icy waterfall on the slope towards the edge?

[The picture OP posted actually dates to about 1909.](https://www.snopes.com/photos/natural/niagarafalls.asp)

Here’s some more pictures of the Falls frozen, all from the above article:

somethinginsideme: In 1969, the Army Corps of Engineers purposely stopped water from flowing over the falls in order to clear rock debris from the bottom.

MiracleMax10: They are looking to stop the flow of water again in future. Not a once in a lifetime thing but a rare occurrence
[potential shut down of falls](http://www.cbc.ca/amp/1.3423305)

Cyndayn: Damn, how cold must it have been for the falls to actually freeze over?

weezerllama: There’s a novel with this event in it called “The Day the Falls Stood Still” by Cathy Buchanan. It has some cheesy romance but the history of the Falls in it is well done.

Fred007007: “Lets take our kid for a stroll at this slippery, icy cliff which might start moving at any moment”

Aceofspades1313: IIRC, on one of these freeze ups people went down below the falls and found some crazy stuff like gold bars, a skeleton, furniture, etc.

windrage2738381: Man. Seeing all that ice go over the falls would’ve been a sight.

Knotfloyd: The wired article on the subject says that people flocked to church thinking the world was ending.

I also found it interesting that the Maid of the Mist boat tour that goes up to the base of the falls was already running in 1848. The owner took advantage of the ice jam to blast huge rocks in the riverbed that his boat captains normally had to skirt.

I_dont_know_shat: I watched a woman jump in the river than go over the falls this summer. It was horrific.

Tacticalmeat: COME ON AND SLAM

AND WELCOME TO THE

FranzJosephWannabe: Wish this were a bit better resolution. Cool pic.

Pessox: The same happened to the whole universe for one day, in 1997 when the space jam occurred

sillybanana2012: I was actually just there this weekend! It’s insane to think that it was cold enough for all that water to freeze enough for people to walk on it.

Catpisslemonade: AMA someone who was present for his event

steezycheesefries: That’s the day Gucci dropped back to the trap 4

NewHendrix: Has this ever happened since?

Sockmonkey33: I wonder how many arrowheads you would find

Needle8Pins: I love how everyone dressed in black for years. Best fashion trend ever.

_ilovecoffee_: Too bad it doesn’t get that cold anymore…wonder why. ?

saltychica: It’s super dangerous to walk on ice jams, but I imagine it was so tempting to walk there anyway.

SirDeep: So that’s the difference between jelly and jam

agoofyhuman: Sure op, that’s the official story but I’m certain that was actually one of the rare occasions they turn the falls off for maintenance. Previous Post: « Donald Trump’s obsession with being Time’s ‘Person of the Year’
Next Post: There are only 2 known pictures of blues pioneer Robert Johnson. One of them was taken in a photobooth early 30s »