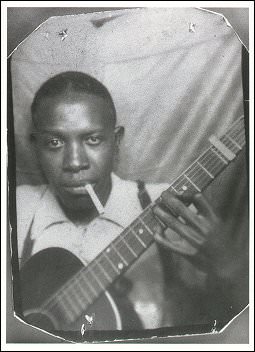 Robert Leroy Johnson was an American blues singer-songwriter and musician. His landmark recordings in 1936 and 1937 display a combination of singing, guitar skills, and songwriting talent that has influenced later generations of musicians. Wikipedia

WelcomeMachine: Ulysses Everett McGill: What’d the devil give you for your soul, Tommy?

Tommy Johnson: Well, he taught me to play this here guitar real good.

Delmar O’Donnell: Oh son, for that you sold your everlasting soul?

kmcg103: here’s a good podcast about him and the song Crossroads http://www.radiolab.org/story/199705-crossroads/

bulle_lover_69: Crazy if you start thinking just how much his contributions have ended up making to American, even world, culture.

johnrose81: Also, his recordings are really sped up. There are a few links and videos out there of the songs at the correct speed. Kinda makes it more understandable how he was able to pull of some of the stuff on guitar.

JamesThePom: Rumour has it my man sold his soul to the devil for those guitar skills… apparently while growing up and through high school his guitar skills were nothing major and one day he came out playing like jimmi hendrix (not quite but you get my drift) his songs crossroads and me and the devil leave us a few clues, and he also died at the infamous age of 27 too…

UnfortunateObserver: He’s got that Forest Whittaker lazy eye thing going on. I’m waiting for him to debrief me on national security.

Towall: The soul of a blues man wouldn’t mean nearly as much without those fingers. Damn. Previous Post: « Niagara Falls stopped flowing for one day due to an ice jam, 1848
Next Post: “Be who you are and say what you feel, because those who mind don’t matter, and those who matter don’t mind.” Bernard Baruch »