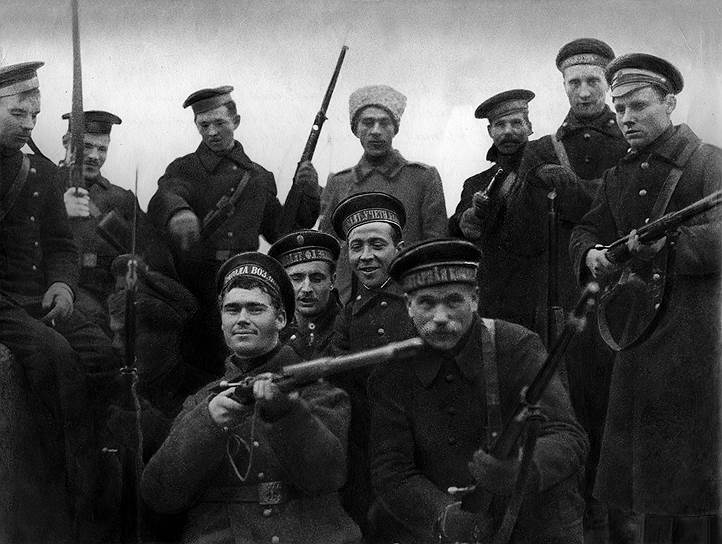 The October Revolution (Russian: Октя́брьская револю́ция, tr. Oktyabr’skaya revolyutsiya, IPA: [ɐkˈtʲabrʲskəjə rʲɪvɐˈlʲutsɨjə]), officially known in Soviet literature as the Great October Socialist Revolution (Вели́кая Октя́брьская социалисти́ческая револю́ция, Velikaya Oktyabr’skaya sotsialističeskaya revolyutsiya), and commonly referred to as Red October, the October Uprising, the Bolshevik Revolution,[2] or Bolshevik Coup was a revolution in Russia led by the Bolsheviks and Vladimir Lenin that was instrumental in the larger Russian Revolution of 1917. It took place with an armed insurrection in Petrograd on 25 October (7 November, New Style) 1917.

It followed and capitalized on the February Revolution of the same year, which overthrew the Tsarist autocracy and resulted in a provisional government after a transfer of power proclaimed by Grand Duke Michael, brother of Tsar Nicolas II, who declined to take power after the Tsar stepped down. During this time, urban workers began to organize into councils (Russian: Soviet) wherein revolutionaries criticized the provisional government and its actions. After the Congress of Soviets, now the governing body, had its second session, it elected members of the Bolsheviks and other leftist groups such as the Left Socialist Revolutionaries to important positions within the new state of affairs. This immediately initiated the establishment of the Russian Socialist Federative Soviet Republic, the world’s first self-proclaimed socialist state. On 17 July 1918, the Tsar and his family were executed.

The revolution was led by the Bolsheviks, who used their influence in the Petrograd Soviet to organize the armed forces. Bolshevik Red Guards forces under the Military Revolutionary Committee began the occupation of government buildings on 7 November 1917 (New Style). The following day, the Winter Palace (the seat of the Provisional government located in Petrograd, then capital of Russia), was captured.

As the revolution was not universally recognized, there followed the struggles of the Russian Civil War (1917–22) and the creation of the Soviet Union in 1922… Wikipedia